“This is a golden opportunity for global thinkers and global governments and all countries to really reboot the economy, environment and education. All three are basic and we really need to start thinking of the world as one village, and the human being as the center point of the impact of the economy.”

“We need to come up with a solution which not only prioritizes the economy and people but also looks after the environmental factors because of which this disease has risen.”

“Our biggest priority, our biggest need is job creation.”

“Our problem as a nation is not that we have a shortage of good quality ideas. Our problem is always implementation.”

Today I would be discussing an extremely interesting topic – Global Think Tanks. A Think Tank or a policy institute is a research institute that performs research and advocacy concerning topics such as social policy, political strategy, economics, military technology and culture and so on. Today globally there are around 8,100 think tanks with India having 510 of these, this being the second highest number of think tanks globally. Think tanks face many challenges including funding, technology and measuring their usefulness and success.

I spoke to the very senior and distinguished Mr Prabhu Guptara, Senior Board Advisor on the topic Global Think Tanks, on this rather unusual topic. When I asked him about his interesting and equally challenging work and experience with the largest bank in the world, he replied, “My responsibilities were in the area of helping the bank to internationalize in terms of their structure and in their culture. Then they asked me to be responsible for think tanks. The idea was that at least one or two practical issues should come out which could be implemented and on average one idea in every two years was implemented.”

So how did he organize this? Did he ask for external help? “The external help and internal help was organized according to the topic because it’s clear that if your topic is the legal environment for hedge funds, you need guys from hedge funds. But if you’re looking at lasers and how they are being transformed and is there a business opportunity for us here, there is nobody in the bank looking after lasers. It’s not our business. So we constructed the team mainly from outside.”

Dr Guptara had earlier mentioned to me that the number of think tanks increased in the 80s and then peaked and gradually came down. When I asked him to elaborate on this, he replied, “The amount of money that is available for this kind of activity has been going down at least in the last two or three years and then some have been closed down. And if you look even beyond the think tanks, if you look to the university space you see that universities are closing down. Whole departments. University of London, for example, has recently closed down its entire department that looks at Latin America. So these are huge steps that are being taken by major institutions to cut down expenses and so the instinctive feeling is that the number of think tanks has started coming down and probably will continue to come down.”

What according to him should be the agenda of the global think tanks given the current economic crisis due to the pandemic? “There is a very clear contrast in the advice that is being given by different people and the debate is really about should we prioritize looking after people or should we prioritize the economy. I think what we need to do is bring all these people together, listen to each one, put out the arguments and ask people to respond to the arguments. You go through a process of coming up with the best solution which looks after both the  points that are being made because both are important. We need global solutions, not only national solutions. We need to come up with a solution which not only prioritizes the economy and people but also looks after the environmental factors because of which this disease has risen. This is a golden opportunity for global thinkers and global governments and all countries to really reboot the economy, environment and education. All three are basic and we really need to start thinking of the world as one village, and the human being as the center point of the impact of the economy.”

What according to him should Indian think tanks treat as priorities? “First of all I think we need to be conscious. Very often we are not conscious that we have our own national think tank. It is called Niti Ayog and used to be called the Planning Commission. The oldest existing independent think tank which was created in 1930 was the Gokhale Institute of Politics and Economics. It was established in Pune. It started with great energy, produced very good work but productivity has declined. So we need to understand why productivity declined whether in the case of the Planning Commission or in the case of Gokhale Institute. It does not happen across all institutions and I’m giving you an example from think tanks. Our second oldest think tank is the Tata Institute of Social Sciences which has not declined in productivity. It is flourishing. It is producing good work.”

By 2030 we will be the youngest populated country. What was his message or one thought to the young generation? “Our biggest priority, our biggest need is job creation,” Dr Guptara pointed out. “Job creation cannot be done by the government or companies. Jobs are only created as people with ideas create new companies and as new companies then grow. That strategy needs a population that is educated and trained to be entrepreneurial.” 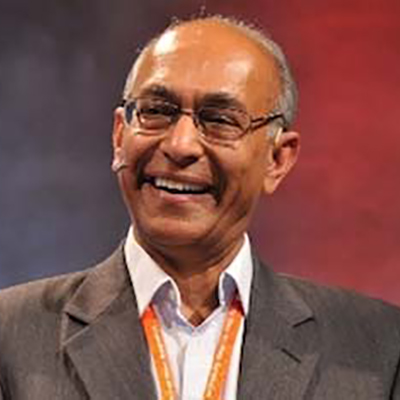 “The pandemic has given us a chance to stop and reflect. It has made us re-evaluate what is absolutely necessary and...
Read More

“If India can transition to a clean energy economy, the results will be cheaper, cleaner, and more reliable...
Read More